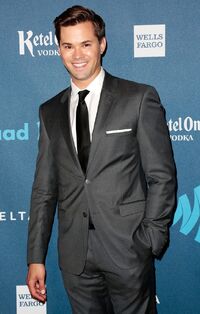 Andrew Rannells is a supporting character in Edward and Eric who appears to be the self-proclaimed "number one fan" of the show. He is portrayed by Andrew Rannells.

Andrew is an enthusiastic young man who works as an intern at Chatterbox Productions. He has an unhealthy obsession with Edward and Eric, and has a frenemy relationship with his pet dog, Jacob. His obliviousness always leads to Jacob getting the last laugh (save for a few instances). He looks up to Edward as an idol, and always dedicates whatever he does to Edward and Eric.

Here is a complete list of the double-length episodes and TV specials that Andrew appears in.

Andrew with Jacob.
Add a photo to this gallery
Retrieved from "https://creativeness.fandom.com/wiki/Andrew_Rannells_(character)?oldid=12782"
Community content is available under CC-BY-SA unless otherwise noted.