GoGang is a fiction series that will never be an actual thing but it's fun to write about. The series follows a group of self proclaimed "heroes" who live in the corrupt and dysfunctional city of GoCity. They often attempt to stop crimes and save people, but almost always end up escalating situations to absurd levels. 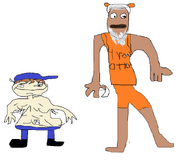 TGB1 and Sophie
Add a photo to this gallery
Retrieved from "https://creativeness.fandom.com/wiki/The_Actual_GoGang?oldid=7552"
Community content is available under CC-BY-SA unless otherwise noted.